On August 21, 1955, according to legend, the “Kelly Green Men” visited the Sutton family and terrorized them for hours.

Gloria Jean Watkins (born September 25, 1952), better known by her pen name bell hooks,[1] is an American author, feminist, and social activist. The name “bell hooks” is derived from that of her maternal great-grandmother, Bell Blair Hooks.[2]

The focus of hooks’ writing has been the intersectionality of race, capitalism, and gender, and what she describes as their ability to produce and perpetuate systems of oppression and class domination. She has published over 30 books and numerous scholarly articles, appeared in documentary films, and participated in public lectures. She has addressed race, class, and gender in education, art, history, sexuality, mass media, and feminism.[3]

In 2014, she founded the bell hooks Institute at Berea College in Berea, Kentucky.

Hooks was born in Hopkinsville, a small, segregated town in Kentucky, to a working-class family.[5] Her father, Veodis Watkins, was a custodian and her mother, Rosa Bell Watkins, was a homemaker. She had five sisters and one brother. An avid reader, she was educated in racially segregated public schools, and wrote of great adversities when making the transition to an integrated school, where teachers and students were predominantly white. She later graduated from Hopkinsville High School in Hopkinsville, Kentucky. She obtained her BA in English from Stanford University in 1973, and her MA in English from the University of Wisconsin–Madison in 1976.[6]

In 1983, after several years of teaching and writing, she completed her doctorate in literature at the University of California, Santa Cruz, with a dissertation on author Toni Morrison.

Hooks’ teaching career began in 1976 as an English professor and senior lecturer in Ethnic Studies at the University of Southern California.[7] During her three years there, Golemics, a Los Angeles publisher, released her first published work, a chapbook of poems titled “And There We Wept” (1978), written under her pen name, “bell hooks”. She adopted her maternal great-grandmother’s name as a pen name because her great-grandmother “was known for her snappy and bold tongue,

which [she] greatly admired”. She put the name in lowercase letters “to distinguish [herself from] her great-grandmother.” She said that her unconventional lowercasing of her name signifies what is most important is her works: the “substance of books, not who I am.”[8]

She taught at several post-secondary institutions in the early 1980s and 1990s, including the University of California, Santa Cruz, San Francisco State University, Yale, Oberlin College and City College of New York.[9] South End Press published her first major work, Ain’t I a Woman?: Black Women and Feminism in 1981, though it was written years earlier, while she was an undergraduate student.[10] In the decades since its publication, Ain’t I a Woman? has gained widespread recognition as an influential contribution to feminist thought.[11]

Ain’t I a Woman? examines several recurring themes in her later work: the historical impact of sexism and racism on black women, devaluation of black womanhood, media roles and portrayal, the education system, the idea of a white-supremacist–capitalist–patriarchy, the marginalization of black women, and the disregard for issues of race and class within feminism. Since the publication of Ain’t I a Woman?, she has become eminent as a leftist and postmodern political thinker and cultural critic. She targets and appeals to a broad audience by presenting her work in a variety of media using various writing and speaking styles. As well as having written books, she has published in numerous scholarly and mainstream magazines, lectures at widely accessible venues, and appears in various documentaries.

She is frequently cited by feminists[12][13][14] as having provided the best solution to the difficulty of defining something as diverse as “feminism”, addressing the problem that if feminism can mean everything, it means nothing. She asserts an answer to the question “what is feminism?” that she says is “rooted in neither fear nor fantasy… ‘Feminism is a movement to end sexism, sexist exploitation and oppression'”.[15]

She has published more than 30 books, ranging in topics from black men, patriarchy, and masculinity to self-help, engaged pedagogy to personal memoirs, and sexuality (in regards to feminism and politics of aesthetic/visual culture). A prevalent theme in her most recent writing is the community and communion, the ability of loving communities to overcome race, class, and gender inequalities. In three conventional books and four children’s books, she suggests that communication and literacy (the ability to read, write, and think critically) are crucial to developing healthy communities and relationships that are not marred by race, class, or gender inequalities.

In 2002, hooks gave a commencement speech at Southwestern University. Eschewing the congratulatory mode of traditional commencement speeches, she spoke against what she saw as government-sanctioned violence and oppression, and admonished students who she believed went along with such practices. This was followed by a controversy described in the Austin Chronicle after an “irate Arizonian”[16] had criticized the speech in a letter to the editor.[17] The newspaper reported that many in the audience booed the speech, though “several graduates passed over the provost to shake her hand or give her a hug”.[16]

In 2004, she joined Berea College in Berea, Kentucky, as Distinguished Professor in Residence,[18] where she participated in a weekly feminist discussion group, “Monday Night Feminism”; a luncheon lecture series, “Peanut Butter and Gender”; and a seminar, “Building Beloved Community: The Practice of Impartial Love”.

Her 2008 book, belonging: a culture of place, includes a candid interview with author Wendell Berry as well as a discussion of her move back to Kentucky.[19]

She has undertaken three scholar-in-residences at The New School. Mostly recently she did one for a week in October 2014. She engaged in public dialogues with Gloria Steinem,[20] Laverne Cox,[21] and Cornel West. 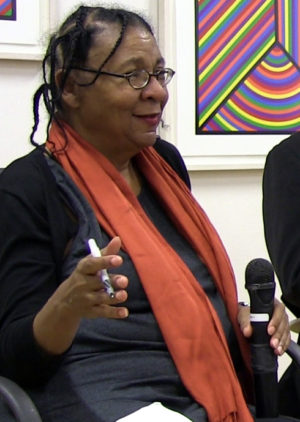