Brenna Beatty Returns to the Tavern with Andrew Dossett 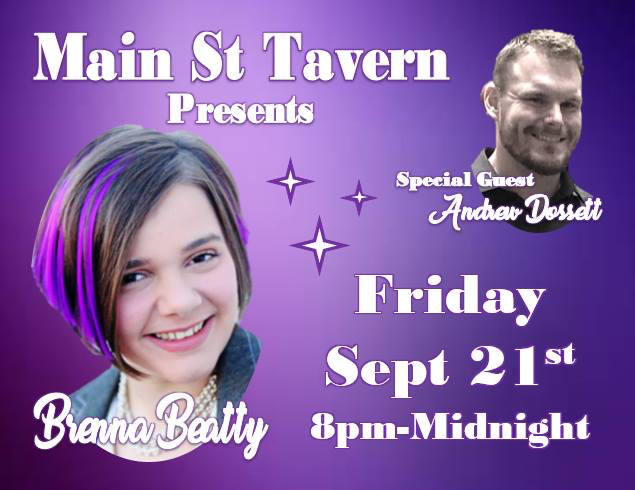 Main Street Tavern is honored to welcome back a Rising Star to the Tavern Stage Live Brenna Beatty. Plus she is being joined by fellow country Artist from Nashville TN Andrew Dossett. Join us for a great night of music Live on the Tavern Stage 8-12

Get to know the Artist
Brenna Beatty has had a passion for music since the time she was a little girl. She’s been singing since before she could talk. At age 11, she wrote and sang her first original song a cappella during a singing competition. By age 16, she had taught herself piano and guitar. To date, she has written/co-written over 400 songs. She completed her first 5 song EP in early 2016 at Use Your Gift Studio with Firefall’s Sandy Ficca! She has had the opportunity to open for many national acts including Dylan Scott, Bryan White, Trick Pony, Lila McCann, James Otto, Keith Anderson, Meghan Linsey, Poco and Jason Michael Carroll. She has also shared the stage with some of Nashvilles’ most respected songwriters including Earl Bud Lee (writer of Garth Brooks “Friends in Low Places) Travis Howard (writer for Miranda Lambert) Aaron Benward (founder of Nashville Unplugged) Lance Carpenter, Brian White and Bruce Michael Miller. Brenna relocated to Nashville in the spring of 2017. She is working on a studio album and towards a recording/publishing deal. Brenna dreams of becoming a world known performing artist and hit songwriter.