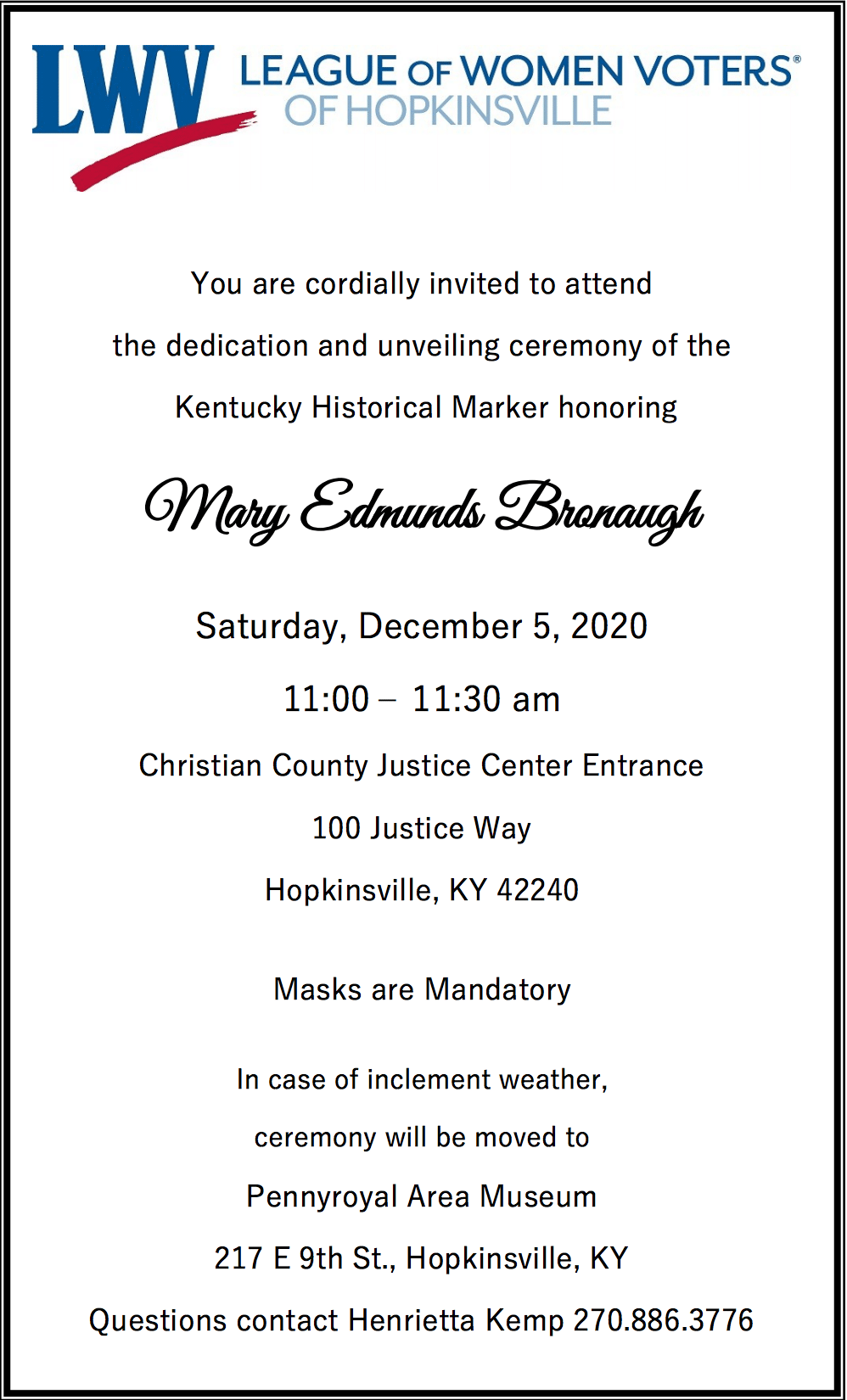 Mary Edmunds Bronaugh played a significant role in the ratification of the 19th Amendment giving Kentucky women the right to vote.  Her leadership in several local and statewide organizations helped to foster equal rights for women.  She was born in Hopkinsville, Kentucky in 1885, the only child of William Venable Bronaugh and Mary Edmunds Bronaugh. She enrolled at the University of Chicago Law School in 1913. At the turn-of-the-century, attending law school was still very much a rarity for women and it demonstrates Bronaugh’s willingness to step beyond prescribed gender roles. Upon completion of her law training with honors in 1915, she passed the bar and became one of Kentucky’s first female lawyers.

Her desire to pursue a career went hand-in-hand with a new commitment to women’s organizations. In 1912, Bronaugh attended the annual meeting of the Federation of Woman’s Clubs at Mammoth Cave. Though the Maysville Public Ledger called her “a leader in the suffrage movement,” her role in the Kentucky Equal Rights Association is not easy to discern. After the United States entered the Great War in 1917, she organized and became president of a Hopkinsville branch chapter of the Navy League, possibly as a tribute to her father who had been a naval officer. The organization proudly reported that it had packed and shipped bandages and was doing everything possible to serve the nation’s soldiers.

In a March 20, 1920, Courier-Journal article, Mary was listed as one of 21 members of the Kentucky Equal Rights Association who warned that male political leaders would be “out of luck” if they opposed granting suffrage to women.  The amendment was ratified on August 18th of that year.

By 1920, Bronaugh’s suffrage activism had launched her into leadership positions and once the 19th Amendment passed, she was one of the women responsible for the creation of Kentucky’s chapter of the League of Women Voters (KLWV) in 1920. Madge Breckinridge, the famed suffragist who died shortly before the League was formed, had personally advocated for Bronaugh to serve as the League’s Chairman. The organization complied with Breckinridge’s wishes and Bronaugh accepted the position. The League’s purpose was to pass legislation “tending to the equalization of the political, economic, and commercial status of the sex.”

Throughout the 1920s, 1930s, and into the 1940s, Bronaugh remained an active force for change. She went to Washington, D. C. in 1921 to lobby for passage of the Sheppard-Towner Maternity and Infancy Act. In the 1930s, she became a vocal support of a federal Equal Rights Amendment and served as an officer of the Kentucky Federation of Business and Professional Women. When the U.S. entered World War II, she once again demonstrated her patriotism by becoming regent of the Hopkinsville chapter of the D. A. R.

Bronaugh was a dedicated and passionate woman, who committed herself to achieving justice—both in the courtroom and at the ballot box. She reportedly spent the later years of her life alone. Yet, despite the quiet end to her rich career of activism, Mary Bronaugh’s dedication helped generations of women exercise their right to vote. She died in 1973 and is buried at Riverside Cemetery in Hopkinsville.