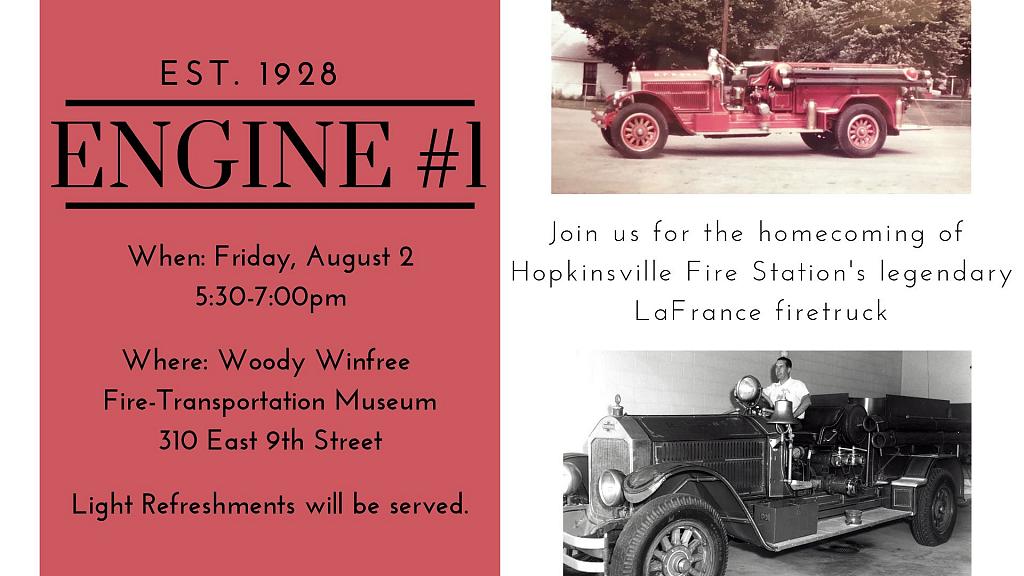 Join your friends at the Museums as they welcome the 1928 American LaFrance truck back to its original home in the Woody Winfree Fire-Transportation Museum, formerly the city’s Central Fire Station. They will hold a short dedication program and will have local firefighters on site to discuss the truck and the work that they did on it. Light refreshments will be served.

The City of Hopkinsville purchased this American LaFrance 1,000-gallon-per-minute pumper at one dollar per pound: $13,750. It was delivered by rail from Elmira, New York on January 21, 1928. The American LaFrance was the first-run truck until 1940. The city sold the truck to John W. “Woody” Winfree on June 20, 1968, and Winfree presented it to the Pennyroyal Area Museum in 2004.

Known as Engine #1, this truck served the Hopkinsville Fire Department for 40 years and still bears all of its original parts and paint scheme. Thanks to the skill, work, and elbow grease of members of the Hopkinsville Fire Department, folks at the city’s Public Works garage, and other mechanics, the truck has been carefully conserved and reassembled for exhibition at the Woody Winfree Fire-Transportation Museum. Join them for its homecoming on Friday, August 2, and be among the first to see it returned to its original location.

The truck will make its way back to the Woody Winfree Fire-Transportation Museum on the afternoon of Thursday, August 1. If you are on Main Street, come out and see the trailer bring this iconic truck back to the station it called home.