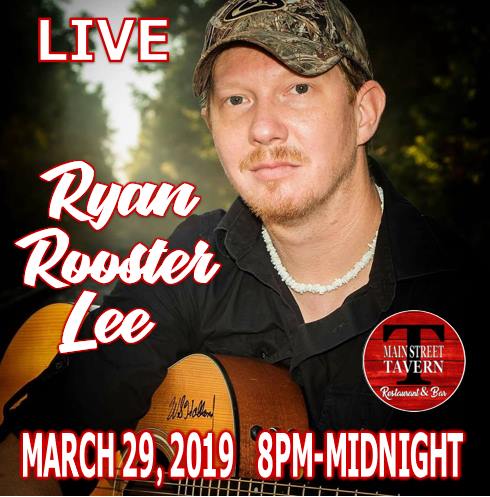 Join your friends at Main Street Tavern for the return of Ryan Rooster Lee on March 29th!

Ryan Rooster Lee (RRL) moved to the small country town of Sharon in northwest Tennessee from Houston, TX when he was in the 5th grade. He was raised by his grandfather Richard D. Lee. When his grandfather passed away in 2001, it then inspired RRL started writing lyrics as a way to cope with the loss.

He started reaching out to local musicians interested in playing live music mostly at houses and basements. By combining his lyrics from life stories and events, RRL delivers messages of hope, power, and inspiration for others.

In 2016, RRL made the official move to Nashville from Northwest TN. Here he discovered an opportunity in the film industry as well. Within one year, RRL appeared in 14 episodes of the CMT show NASHVILLE (with one featured scene in episode 5), one episode on Still the King starring Billy Ray Cyrus, and his most exciting experience was the movie All Saints starring John Corbett, David Keith, and Barry Corbin.