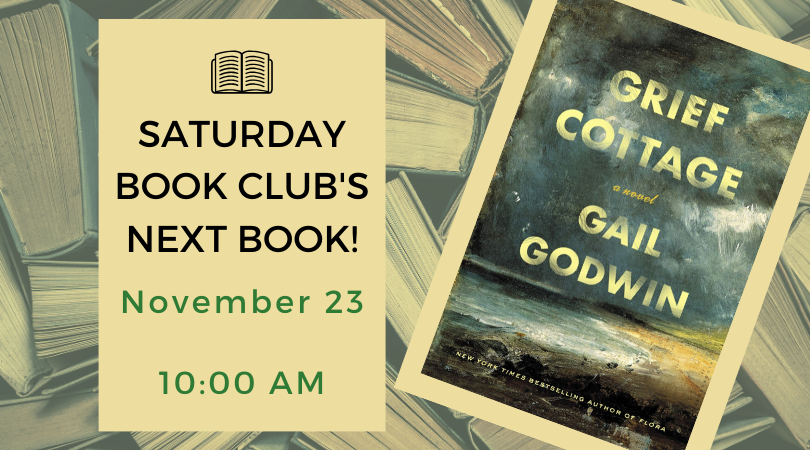 Saturday Book Club is discussing the fantastic Grief Cottage by Gail Godwin on November 23 at 10:00 am. Books are available to check out at the library front desk. If you’re curious about what the book is about, you can read the summary below:

The haunting tale of a desolate cottage, and the hair-thin junction between this life and the next, from bestselling National Book Award finalist Gail Godwin.

After his mother’s death, eleven-year-old Marcus is sent to live on a small South Carolina island with his great aunt, a reclusive painter with a haunted past. Aunt Charlotte, otherwise a woman of few words, points out a ruined cottage, telling Marcus she had visited it regularly after she’d moved there thirty years ago because it matched the ruin of her own life. Eventually she was inspired to take up painting so she could capture its utter desolation.

The islanders call it “Grief Cottage,” because a boy and his parents disappeared from it during a hurricane fifty years before. Their bodies were never found and the cottage has stood empty ever since. During his lonely hours while Aunt Charlotte is in her studio painting and keeping her demons at bay, Marcus visits the cottage daily, building up his courage by coming ever closer, even after the ghost of the boy who died seems to reveal himself. Full of curiosity and open to the unfamiliar and uncanny given the recent upending of his life, he courts the ghost boy, never certain whether the ghost is friendly or follows some sinister agenda.

Grief Cottage is the best sort of ghost story, but it is far more than that–an investigation of grief, remorse, and the memories that haunt us. The power and beauty of this artful novel wash over the reader like the waves on a South Carolina beach.”