The Spirit of Harriet Tubman 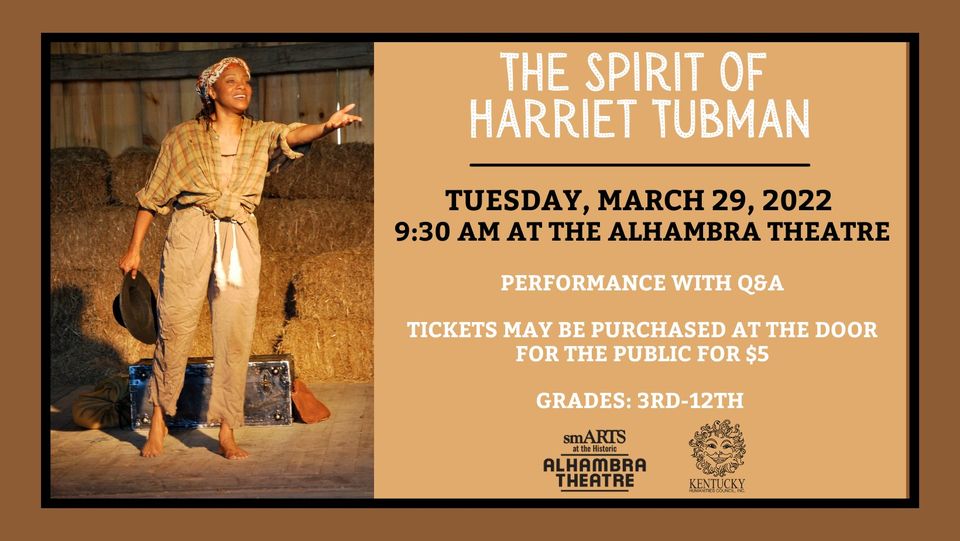 THE SPIRIT OF HARRIET TUBMAN
TUESDAY, MARCH 29, 2022 | 9:30AM PERFORMANCE WITH Q & A
Grades: 3rd-12th
On a barren stage with only a trunk of costumes, Leslie McCurdy thrills her audience with her passionate portrayal of The Spirit of Harriet Tubman. The Pennyroyal Arts Council’s Students Meeting the Arts program presents this breathtaking portrayal with a school day and open to the public performance with McCurdy embodying the “spirit” of Harriet Tubman from her early childhood to her elder years. Audiences share standing ovations, cheers and tears at this performance; calling it: “Brilliant”, “Inspirational”, “ Deeply Touching”, and “Beautiful to Watch”.
There are many plays about Harriet Tubman, but none share her entire life story like a visit with The Spirit of Harriet Tubman. Leslie McCurdy invokes the ‘spirit’ of Harriet Tubman as she portrays the life of the famous Underground Railroad conductor, recreating stories familiar and some rarely told, using words said to have been Harriet Tubman¹s own. Through it all we learn of the faith and conviction that drove Harriet Tubman to follow her dreams; the spirit of the past connecting with the present, inspiring her charges to have the courage to do the same envisioning their future.
TICKETS: May be purchased for the public at $5 in advance at https://pennyroyalartscouncil.ticketspice.com/harriet-tubman-smarts
RESERVATIONS: Contact Molly Campbell at [email protected]
+ Google Calendar+ Add to iCalendar