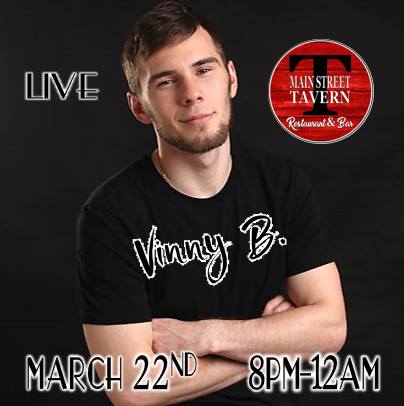 Main Street Tavern is excited to Welcome Back Vinny B to the Tavern Stage on Friday, March 22nd!

Meet the Artist –
Vinny B is a country singer-songwriter, now located in Nashville, TN. Born and raised in Massachusetts, he was never really surrounded by country music, and the only way to get into it was to search for it. He is a member of the New England Country Music Organization, which has led him to travel all over New England, performing at various venues. After high school, he attended the University of Southern Maine to study jazz for one year, before deciding to move to Music City. There, he pursued a degree in Commercial Voice at Belmont University, where he graduated from in the summer of 2017. At Belmont, he started to write his own music and released his debut EP, “Let’s Get Crazy,” during his junior year. Now, he continues to write and perform in between his jobs at the Opry Backstage Grill, where he sings regularly, and the world-famous Grand Ole Opry. His one dream in life is to be able to travel the world and tell his stories through his music