Will Abeles is a stand-up comedian and producer based out of Nashville by way of Brooklyn (with a brief year in his hometown of Hagerstown, MD for a little thing called 2020). Most recently, Will was voted the third best comic in Nashville by the Nashville Scene magazine’s “Best of 2021” behind Nate Bargatze. In January of 2020, Will left New York for a self-produced national tour to Los Angeles and back, leading up to his second album recording at Empire Comedy Club in Portland, ME. Unfortunately, Will got as far as Indianapolis on his return trip in March before the tour and album were canceled. But having been known to “zig when everyone else zags,’ Will teamed up with Dewey Comedy Productions and recorded his second album in May of 2020 over Zoom. The album, titled “The Pride of Hagerstown: The Tall Tales and Tragic Truths of Will Abeles” is available on all streaming platforms and Bandcamp for purchase now. Will is also the co-host along with Drew Harrison of the “My Funny Friends” podcast, a stand-up comedy origin story podcast where they interview fell veteran comedians about their upbringing and journey through stand-up.
In December of 2017, Will’s debut comedy album “Regrets of My Father” debuted at #1 on the iTunes Comedy Charts. He’s also been featured in festivals all across the East Coast including the Baltimore Comedy Festival (twice), the Wiz City Comedy Festival in Philadelphia, WOOtenanny in Worcester (twice), the Portland Maine Comedy Festival (never again), the Charm City Comedy Festival (same), The Ellicott Silly Comedy Festival and the 2021 North Carolina Comedy Festival in Greensboro, NC.
As a performer and producer, Will’s been featured in TimeOut NY, Vanyaland, CNL, the Stellar Underground and ComedyCake.com and has written for theInterrobang.com, TheBringer.com and the AppleInsider Podcast.

Nashville-based comedian Matt Taylor comes with an affinity for self-deprecation and finding the funny in life’s shortcomings. Like sifting for silver in a septic tank, his comedy can best be described as ignorantly optimistic. He is a regular at Zanies Nashville and was recently a featured comic on season 2 of Stand Up Nashville (Circle All Access/Peacock TV). He has toured with John Crist and worked with Pauly Shore, Dusty Slay, Clayton English, Aaron Weber, and many more. Other festival performances include Atlanta’s West End Comedy Fest and Nashville’s Eastside Comedy Festival.

After the success of our last Comedy Night, we are excited to do it again!
There is a charge $10 per person, but we are offering 10% off ALL FOOD that night.
The Comedians inform us that this show is geared more toward 18 and over- so Rated “R” but not “X” LOL
Call 270-484-5066 for Reservations as seating is limited.
Meet the Headliner
Mandee McKelvey has lived one hell of a life, from growing up poor in rural South Carolina to becoming a widow in her 20s. Wait, it gets funnier! As one of Louisville’s most acclaimed stand-up comedians and storytellers, Mandee is revered for her ability to spin tragedy into comedy. Now, in her first one-woman show, Mandee is telling some of the key stories that made her into the woman she is today, for better or for worse. Mandee McKelvey is a stand-up comedian out of Louisville, KY. She runs the roast show Character Assassination at The Bard’s Town Theatre, and is the co-producer and co-host of the storytelling show We Still Like You. She is the 2018 Carney Award Winner for Comedian of the Year and recently opened for Tig Notaro.

Atlanta native Evan Berke is a stand-up comedian and producer currently residing in Nashville. He has showcased at many legendary clubs around the country including Gotham and Comic Strip in New York, The Comedy Store and Ice House in Los Angeles, Zanies in Nashville, The Punchline in Atlanta, and Jimmy Kimmel’s Comedy Club in Las Vegas to name a few. Evan’s deft charm and love for interviewing positioned him well to be an On-Air Reporter for TMZ from 2017-2019.

Come have your mind read by the Amazing and Uncanny Peter Antoniou. This must see performance showcases his Razor Sharp Wit, Incredible Story Telling Abilities, & Improvisational Comedy as he dazzles the crowd with his Psychic Mind Readings. Coming all the way from London’s West End to being a Semi-Finalist on America’s Got Talent he is bringing his fantastic stage show here to Oak Grove Racing, Gaming, & Hotel.

Alabama-born. Nashville-based. Mitchell Crumbley is a one-liner comic who draws inspiration from notable acts such as Steven Wright, Mitch Hedberg, and Demetri Martin.
We have wanted to have a Comedy Night for a long time and are very excited announce we are having one Friday February 25th at 8pm. To bring in 4 comedians we are going to have to charge $10 per person, but we are offering 10% off ALL FOOD that night.
The Comedians inform us that it is a fairly family friendly show- they’d rate it as PG13. lol

There will be 4 Comedians
Meet Them:

Jake Hovis
Jake Hovis is huge. Seriously, he is 6’8” and well over a hundred pounds. He has performed in comedy clubs around the country including Flappers in Burbank, LA Comedy Club in Las Vegas, Crackers Comedy Club in Indianapolis, and Comedy Works in Denver. He also regularly participates in the World Series of Comedy and can be heard on Sirius XM. Jake enjoys the little things in life like his normal sized wife and two miniature dachshunds.

Dan Alten
Dan Alten is an intelligent idiot who is very good at making people laugh. He has traveled the country headlining shows in 30 different states playing everywhere from dive bars to fancy theaters to punk basements to beloved comedy clubs and a hippie commune. He has opened for Kyle Kinane, Rory Scovel, Johnny Pemberton, Hari Kondabolu, TV weirdo David Liebe Hart, rapper Open Mike Eagle, punk bands and aBoner City and GRLwood and a guy at an open mic who tried to throw his father’s ashes into the crowd. He has released 2 albums, published a zine, filmed a pilot for a standup show with Amazon that has yet to air, and is allegedly in the Guiness Book of World Records for participating in an 8 day continuous comedy show. If you don’t like him you can spit on his car.
Josh Gibson
Josh Gibson’s comedy will make you think but not like too hard where it becomes a bummer. He’s opened for bands, performed in bars, basements, comedy clubs, the web-series “Dream Wishes” and under the scolding gaze of a nursing home event coordinator.
June Dempsey
June can be seen hosting comedy shows in her basement alongside various locals and vermin. June started comedy after buying a house, she realized that she had achieved all her life dreams at age 24. When not keeping her house clean for shows, she’s working on writing sketches and tightening up jokes. June has a degree in Geography and GIS from the University of Louisville, which they’ve put to use in their job as Analyst for the Metropolitan Sewer District, but their comedy is clean enough.

Dog and Mouse House is coming to Hopkinsville.
We’re doing a clean comedy show with Dan Alten, June Dempsey, Josh Gibson, and Jake Hovis.
It’s ten dollars, and should be around 90 minutes long.St

A modern-day Johnny and June Carter Cash, Arvie & Bunny’s stage show combines the humor and unique harmonies for which Johnny and June were famous for, all while adding their own unique twist to the familiar classics. In addition, Arvie plays country favorites from the likes of Hank Williams, Merle Haggard, Willie Nelson, Waylon Jennings, Randy Travis, George Strait, Garth Brooks and many more.

Copper Canyon Ranch will host “Frontier Days: Return to the Ranch” during the last weekend of July–so be sure to join them on July 26th, 27th, and 28th! “Six Guns Entertainment” will be back!

“Six Guns Entertainment is a western reenactment group dedicated to the accurate portrayal of the American West in the late 19th Century”. The Copper Canyon Crew of cowboys and actors will be there too!

Copper Canyon will have live gunfights and re-enactments, music and comedy shows, and great food and other vendors for the weekend! Frontier Days is a great way to see how it was in the “Old West” days! This is a family friendly event.

There will also be reenactors setting up tents and camps! A great event for photographers and models as well. Bring the entire family for a weekend of fun! 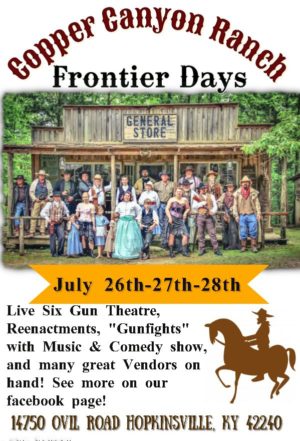