A native of Mechanicsburg, Pennsylvania, Hunter Lyons has been playing guitar since the age of eight. He relocated to Nashville in June 2017, and works in the trades most of the week. He spends every extra hour playing guitar, writing tunes and telling stories.

Join your friends for an evening of live music at Main Street Tavern! Tonight’s entertainer is Eric Ryan!

Meet the Artist
Eric Ryan was born in Florida and raised in Alabama and Virginia. Eric has always enjoyed country music and currently lives in Clarksville so he can be closer to Nashville. He writes his own music and lyrics and learned to play at 19.

Eric has opened for quite a few top-name artists like Keith Urban, Rascal Flatts, Joe Diffie, Charlie Daniels, and more! He was a top 20 national finalist on season 1 of Nashville Star with Miranda Lambert when he was 21.

Nashville-based Americana singer-songwriter Britt Dignan has the ability to capture your heart with his talent for writing meaningful lyrics placed smoothly over his slick acoustic melodies. He paints a picture with his descriptive story telling, soulful voice and extraordinary stage presence, placed a top a high energized passion and love for music.

Join your friends for an evening of live music at Main Street Tavern! Tonight’s entertainers are Joseph Drake and Madison Ramage! 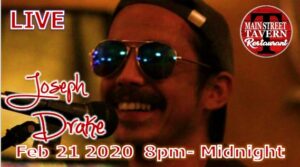