MB Roland Distillery and Casey Jones Distillery are ‘grain to glass’ distilleries and destinations on both the Stateline Whiskey Tour and the Kentucky Bourbon Trail Craft Tour.

Steve Gorman (born August 17, 1965, Muskegon, Michigan) is an American musician and sports talk radio host. Gorman is best known as the drummer of the American Americana rock/blues rock band The Black Crowes.[1] He spent time as the drummer for British rock band Stereophonics. He also hosted on his own radio show Steve Gorman Sports! on Fox Sports Radio.

While a fourth grader at Benfield Elementary School in Severna Park, Maryland, Gorman joined the band and played the snare drum. Like so many others, he was initially inspired and moved when he first listened to the Beatles. After moving to Hopkinsville, Kentucky in 1975, Gorman went to high school (University Heights Academy) with Clint Steele, an aspiring guitarist. Gorman later attended college and was a broadcasting major at Western Kentucky University but still found time to play, practice, and stay in touch with music while working as a Resident Assistant in North Hall. He played drums with several Bowling Green bands including Alfred & The Stately Wayne Manors, Swale, A Tribute to Elvis and the Ricky Nelson Story. Finally, in 1986, Steve, along with friends Brent Woods and Jon Vanover, formed Lack of Interest and recorded a four-song demo tape titled “Content to Sit and Stare” in April 1986 at the University Heights Academy gymnasium.

In February 1987, he joined his high school friend Clint Steele in Atlanta, Georgia to drum for Steele’s band, Mary My Hope. While in Atlanta he became good friends with Chris Robinson and his brother Rich. When the Robinson brothers lost their drummer Jeff Sullivan to the band Drivin n Cryin, Gorman was asked to sit in and play on “Mr. Crowes Garden’s” demo session for A&M records. He ended up playing with the renamed Black Crowes for their first nine albums over 15 years. In late 2001, he decided to leave the band to pursue other avenues and relocated to Los Angeles. In 2005, he rejoined the reformed Black Crowes.

Gorman spent 2004 on the road with the Stereophonics. His playing can also be heard on Warren Zevon‘s final studio recording The Wind, Bob Dylan‘s Greatest Hits Volume 3, Jack Casady‘s Dream Factor, Joe Firstman‘s The War of Women, John Corbett‘s self-titled debut album, Bo Bice‘s See The Light and 3, and the first album by Brothers of the Southland. Gorman is currently a member of Trigger Hippy along with Joan Osborne, and Nick Govrik.

A lifelong sports fan, in March 2010, Gorman hooked up with his friends Mitch Blum and Brandon Gnetz to create a sports, music and pop culture podcast and website called Steve Gorman Sports! On the show Gorman tells tales of life on the road and riffs on current sports, music and pop culture events. Gorman’s show was broadcast on a Nashville radio station but he left the station in the summer of 2013.

On January 2, 2014, it was announced that Gorman would join Fox Sports Radio as the host of a daily three-hour show with his cousin and co-host, Jeffrey Gorman, from 3pm to 6pm Eastern, broadcast immediately following Doug Gottlieb’s show. Gorman’s stint with Fox Sports Radio began on January 27, 2014.

On October 7, 2014, Steve Gorman Sports! was moved to 6pm to 8pm Eastern, which immediately follows Jay Mohr’s (from April 24, 2017: Doug Gottlieb’s) show. On September 11, 2018, the Fox Sports Network announced that Gorman’s show, and JT the Brick’s show, would be removed from the network’s lineup. 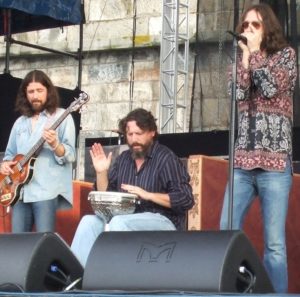