Hopkinsville has a wonderful Rail to Trail project that provides Greenway space for walking, biking, running, and other outdoor activities for our citizens and visitors. Phase Two of the project has begun, and we invite you to check it out!

It’s just 2 months until we get to experience one of the most phenomenal sights that human eyes can convey to a brain! I just wanted to reminisce about the last 10 years since I learned that Hopkinsville was the point of greatest eclipse.  On June 1, 2007 I received the following email from Dirk Barthelow:

“I was wondering if any plans are being discussed or formulated for the total solar eclipse that will occur on August 21, 2017.”

We did a google search and found out there was indeed a total solar eclipse that was running coast to coast in the United States.  The Visit Hopkinsville Team immediately added a count down clock on our website.  We began talking about the eclipse at the various meetings and let this information slowly begin to catch on throughout the community. 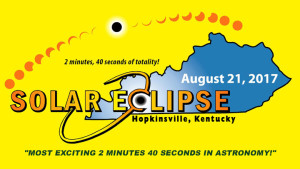 Our first community meeting was held February 26, 2013 at Harper House where we had about 65 people attending.  In August 2013 we brought in Dan McGlaun, an experienced eclipse chaser to speak to a group of 130 people at the Hopkinsville Community College.  At that time Dan had experienced 10 total eclipses.

We brought in 2 more eclipse chasers Mike Kentrianakis from Astoria, New York and Xavier Jubier from Paris, France.  They gave us an overview of what it is like to view a total solar eclipse.  One thing that they said about eclipses was there are never enough eclipse glasses. 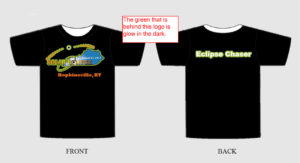 Last September the city of Hopkinsville hired Brooke Jung as the Eclipse Coordinator.  Brooke hit the ground running and her only job is all things eclipse.  The CVB assists her anyway we can.

Wow how did 10 years pass so quickly!