Hopkinsville is home of more than 112 acres of complex parks and recreation spaces.

Give the gift of Hoptown this holiday season! You can find these local products that are all unique to Hopkinsville!

In Hopkinsville, we are SO thankful for…

1. Keeping the tradition alive … VIRTUALLY! The 19th Annual Turkey Trot will be held virtually in 2020 and will allow runners/walkers to complete the 5K at any location, at any time!  Visit HoptownRec.com by Nov. 18 to order your official race shirt.

2. Celebrating Native American Heritage Month in November! We recognize the entire month by paying tribute to the men, women and children who passed through Hopkinsville during the Trail of Tears. Did you know you can get your National Parks Passport stamped at Trail of Tears Park & Commemorative Center?

3. Raising a glass at Casey Jones Distillery and MB Roland Distillery! Take a tour and sample some spirits at these two grain-to-glass craft distilleries here in Christian County, then complete the Stateline Whiskey Tour to earn a unique gift.

4. Connecting with nature on the newly expanded Hopkinsville Rail Trail!

5. Spending some family time in the corn maze or sinking a hole-in-one at Christian Way Farm‘s mini golf course.

6. Dining at one of our fabulous local establishments. Christian County is home to over 120 restaurants! How many have you had a chance to sample?

7. Browsing at one of our beautiful local boutiques and shops to help find all of your holiday needs!

8. Saluting our brave men and women. We are proud to be home to the 101st Airborne Division at Fort Campbell. Our thanks to all the wonderful soldiers who keep our country safe.

10. Listening to the sound of live music coming from the Alhambra Theatre!

11. Smelling the unmistakeable scent of dark fired tobacco barns. Did you know that Christian County has more farmland acreage than any other county in the Bluegrass State?

12. Driving backroads in Christian County and soaking in the scenic routes.

14. Enjoying Hopkinsville’s vibrant art scene! There are so many shops where you can express your inner artist. You can even enter a design to be featured on a Downtown Hoptown Banner by submitting to the Hopkinsville Art Guild!

15. Learning the rich heritage and history told through the brand new exhibits at the Pennyroyal Area Museum.

17. Exploring the beautiful clear waters from 120 feet below the surface at Pennyroyal Scuba Blue Springs Resort.

18. Sipping a delicious flight at Hopkinsville Brewing Company, where Hoptown stays hoppy! Enjoy a pint of craft beer while checking out the new expansion.

19. Playing on approximately 112 acres of complex parks and recreations spaces! Get out and stretch your legs or check out at the free walking tracks at Tie Breaker Athletic Park or inside the Planters Bank-Jennie Stuart Health Sportsplex on cool brisk mornings!

20. Patronizing our lovely event venues that help create spectacular memories during life moments we hold most dear. Our unique event spaces provide breathtaking backdrops in making up the fabric of our community.

Vote for your favorite Bale on the Christian County 4-H Facebook page.

Check out this year’s un-bale-avable entries:

Did you know we have a great covered patio area with picnic tables and Wi-Fi access here at the Hopkinsville Visitors Center?

If you and your family are looking to get some fresh air and also get some schoolwork done, we would love to have you! Our free wifi information is posted on the door…come connect with us! 💻

Be sure to check out these additional WiFi Hotspots around Christian County!

You can now purchase from our gift shop ONLINE! 🎉 We will be providing pick-up and shipping options so even our out of town visitors can show their Hoptown pride!

Hopkinsville, KY — On June 6, bells will chime in Carentan, France —Hopkinsville’s Sister City— at 6:44 pm to celebrate the 76th anniversary of liberation from Nazi Germany rule. In Hopkinsville, 4,193 miles away, bells will also chime to honor this historic event, as local churches are encouraged to participate.

“We are so proud of our relationship with our Sister City, Carentan, and look forward to recognizing this extremely significant date and time in history,” said Hopkinsville Mayor Wendell Lynch. “We invite all churches and organizations that are able to join us, in ringing their bells.”

With a seven-hour time difference, bells will chime in Hopkinsville at 11:44 am (local time) on Saturday, June 6. The historic clock tower, which sits atop the Woody Winfree Fire Station Museum, will be rung by local clock caretaker Russ Hayes.

“The ongoing pandemic crisis has led to the complete cancellation of all our D-Day anniversary events,” Carentan Les Marais Jean-Pierre Lhonneur said. “But this does not mean that we, in Carentan, Normandy and all over France, will let these days pass unnoticed. Quite the opposite really.”

The city of Carentan has dedicated much of its city website to telling the story of what happened in their town 76 years ago and how the people of Carentan have been honoring and celebrating the liberators ever since.

On June 6, 1944, the 101st Airborne Division began its amphibious invasion of Normandy — a high-risk maneuver code named Operation Overlord, according to a Fort Campbell Courier article on March 10, 2016. Fighting to consolidate Omaha and Utah beaches, the soldiers made their way through the town of Carentan in the days following D-Day. From June 10 until 14, the 101st suffered heavy casualties in their battle against the German Wehrmacht.

At the end of the battle, German forces withdrew and the small town was liberated from Nazi occupation.

“There was something to do,” said Co-Founder of the Normandy Victory Museum and coordinator of the Bells of Freedom event in Normandy Patrick Fissot. “In recent days, we have lost several of our veterans, such as Bob Noody or Gorges Schenkel, who both returned regularly. We had to show those who stay that we don’t forget them.”

Fissot also serves as an instructor at the high school in Carentan and chaperoned a group of 20 students to Hopkinsville last March for a week-long visit.

Enjoy these Hopkinsville and Christian County puzzles of our iconic landmarks and scenic views! Please let us know if there are any other pictures you would like to see added by emailing [email protected]

We hope you have fun! 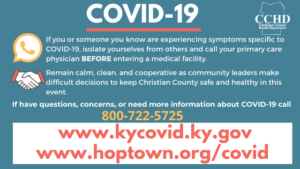 KY Governor Andy Beshear has issued an executive order requiring that Kentuckians in public must wear a mask.

To read the executive order and exemptions, click here.

Due to an increase in vaccine supply, the Christian County Health Department has now opened up phase 3. We are now vaccinating ANYONE who is over the age of 18.

We are vaccinating BY APPOINTMENT ONLY. No walk-ins will be accepted. Appointments scheduled that do not meet phase criteria may be cancelled without notice.   Prioritization is placed on age and health conditions. Moderna vaccines (1000) are received each week and appointments will be available based on vaccine supply. If you are an essential worker, please come prepared to provide proof of eligibility.

If you would like the vaccine and have not yet gotten an appointment please call 270-887-4160 or visit app.acuityscheduling.com/schedule.php?owner=21662423&appointmentType=20060026. We are asking those in the community to help those 70 plus with making appointments.

In order to be eligible for the vaccine from the Christian County Health Department you must meet the following criteria:

**If you schedule an appointment and do not meet the criteria above, your appointment may be cancelled without notice.

Vaccine quantities vary, and scheduling is based on availability. The Christian County Health Department has created a website for the most up-to-date information on vaccine schedule availability https://cchdcovid-19updates.weebly.com/. Individuals can also call the health department for more information at 270-887-4160 ext. 640. We understand that many of our senior population, 70+, do not have internet access and can sometimes feel as though they are not getting the latest information. We ask that community members share this information with senior agencies, churches, and other organizations who might serve our senior population to ensure they have access to vaccine information.

For more vaccine info & to sign up for vaccine notifications from the state, visit vaccine.ky.gov.

The Christian County Health Department (partnered with the Kentucky Department of Public Health) is now offering FREE COVID-19 testing for ANYONE who wants to be tested with or without symptoms. COVID-19 testing will now be held at the Christian County Health Department on Mondays and Wednesdays from 9am-11am and NOT at Tie Breaker Park. Please call 270-887-4160 ext. 133 to make your appointment.  CCHD is no longer offering rapid testing on Tuesdays & Thursdays.

Don’t forget to support local restaurants and other businesses with pick up orders, by purchasing gift certificates, or leaving positive Yelp reviews.  Here’s a list of downtown restaurant and beverage establishments as well as others around town.  These restaurants are offer takeout options.

Click HERE or on a link below for information on Small Business Administration loans, Unemployment Insurance, and other benefit program resources. 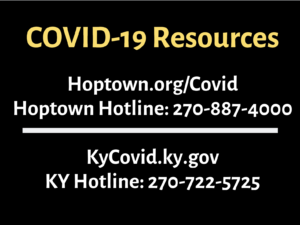